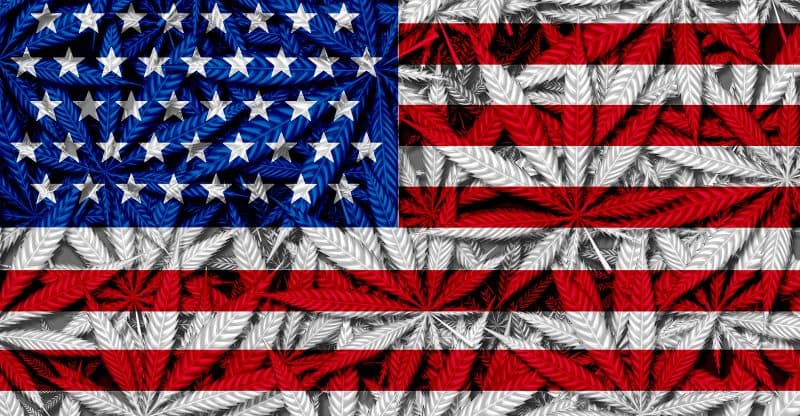 Cannabis legislation measures that were passed in eight out of nine states during the 2016 elections was a move that proved agreeable to voters on both sides of the political spectrum. As the November elections approach, the industry and its supporters are hoping for a win in another five states.

Since 2016 medical cannabis is now legal in 33 states, and 11 of the 33 have also legalized marijuana for recreational use by adults. This year another five states are putting their prospective cannabis laws forward to voters. It is now up to them to decide if their states will allow cannabis for medical, recreational, or both uses.

Legalized cannabis sales in the states have already contributed $15 billion in revenues in 2019. Statista forecasts they will reach $23 billion by 2025 and BDS Analytics, which tracks sales at dispensaries, puts that figure at $30 billion by 2024.

These are the five states that will be voting for cannabis legislation in November 2020.

The vote for recreational cannabis was narrowly defeated in Arizona with 51.3% votes against it during the 2016 elections. The campaigns for and against the vote had attracted combined donations of $13 million from high-profile companies.

The U.S. cannabis industry has matured in the four years since the last election, and this time the backers of Proposition 207 are some of the biggest names in the cannabis industry. Finance records from the state show that support is coming from retailers and producers with interests in Arizona and other states. According to CNN Business, these include Tempe, Harvest Health & Recreational (HRVS), Curaleaf, and Cresco Labs.

The vote faces opposition from Governor Doug Ducey, Smart Approaches to Marijuana and the Arizona Chamber of Commerce.

Changes to Proposition 207 are few. It continues to propose that adults 21 years and older possess up to 1 ounce of cannabis, and to able to transfer and consume it. The provision also allows for the creation of a regulatory system for cannabis cultivation and sale. Some changes include the addition of social equity provisions and some criminal justice reforms.

Since he was elected in 2017, Governor Phil Murphy has been trying to act on his promise to legalize cannabis. All attempts so far have failed, therefore, it was decided to put it before the voters of New Jersey.

Public Question 1 is what the voters are going to be asked to approve and it aims to legalize cannabis for adults 21 years and older. Also, the recreational cannabis will be subject to the 6.625% sales tax of the state, and its sales will be regulated by the commission that oversees the medical cannabis business in New Jersey.

Besides a projected annual income of $850 – $950 million for the state by 2024, if passed, the bill could help accelerate legislation in New York and Pennsylvania.

Unlike other states that already have legal medical cannabis, South Dakota is looking to voters to help them enact medical and recreational use to the state.

Marijuana Policy Project is helping with awareness for the South Dakota campaign.

Montana voters also must decide on two initiatives on their ballots. The first one is I-190, and if passed, adults in the state will be allowed to possess, buy, or use cannabis for recreational use but with a 20% tax.

The estimated tax that will be generated is $38.5 million by 2025. More than 50% of these taxes will be going to the general fund of the state, with the rest used for various programs including veteran services, substance abuse treatment and enforcement.

Initiative CI-118 will be to establish the legal age to possess, purchase, or consume cannabis to 21.

There are also two competing measures to legalize cannabis for medical purposes in Mississippi.

A citizen petition resulted in the first one Initiative 65. Here it will be decided if physicians will be allowed to recommend medical cannabis for patients with qualifying conditions including cancer, multiple scleroses, post-traumatic stress disorder, etc. It will also allow the constitution to be amended and for the state to establish a regulatory program for growing and selling medical cannabis. The aim is for the products to be taxed at 7%.

Other conditions are that marijuana products are produced by state-licensed manufacturers, are pharmaceutical-grade. Treatment will only be overseen by licensed medical professionals, including nurses and pharmacists. Patients will also need to be enrolled on a registry.

According to the Marijuana Business Daily, if Initiative 65 is passed the total sales of cannabis could be anything between $750 million to $800 million by 2024.

Now that some of the states with the strictest cannabis laws in the U.S. are prepared to take cannabis legislation to the ballot, they could also generate millions in tax revenues, something that is much needed. Voters in favor of cannabis legislation need to carefully consider how to vote in their states, and this may well change the outcome of the November elections.

As the Trump Administration continues to ignore calls by the public for federal marijuana legislation, many Democrats support it. Even though the Democratic Joe Biden is against it, he supports dropping criminal penalties for cannabis possession and wants medical cannabis to be more accessible.