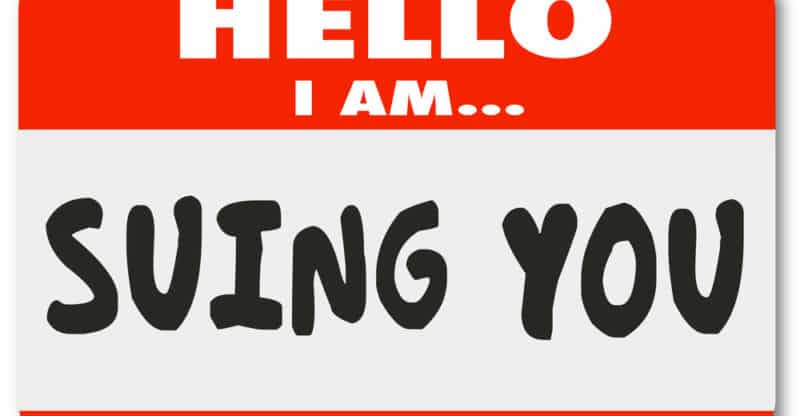 Personal injury claims usually involve plaintiffs with serious injuries resulting from accidents, slips and falls, medical malpractices, and faulty products. However, they sometimes do border on the bizarre. Here are the 10 of the strangest personal injury claims of all time.

A man found a 7-inch serrated plastic knife baked into his Subway sandwich and decided to sue the company for damages. He filed a $1 million lawsuit, even though he didn’t swallow the knife or suffer any physical injury from it. In his lawsuit, he also said he contracted food poisoning from the sandwich, leading to severe stomach ache. On top of that, he outlined that due to the sandwich, he contracted food poisoning, which led to him suffering severe stomach aches. The personal injury claim was settled.

This case demonstrates there are no limits when it comes to personal injury claims. An Israeli woman sued the weatherman from an Israeli television channel because he didn’t predict the weather correctly. He had reported good weather, but it rained.

According to the plaintiff, as a result of the weather report, she didn’t dress correctly and suffered the flu. She sued for $1,000 compensation for missing a week off work and the money she spent on medication. She won the case against the TV station and got her damages.

A man’s dream to swim beside a killer whale went wrong. He managed to remain behind after Sea World closed for the day by hiding from the security guards. When all was quiet, he entered the tank with the orca but was killed by the whale.

His parents sued Sea World for not publicly warning people that killer whales can kill people. They also accused Sea World of presenting killer whales as friendly creatures by selling stuffed whales in the gift shop.

A visit to a Los Angeles branch of Victoria’s Secret turned into a nightmare for one customer. The incident happened in 2008 when a woman was trying on a pair of panties. A metal piece holding a rhinestone heart in place flew off and struck her in the eye. The woman, a traffic officer by vocation, suffered a cut cornea treated with topical steroids.

Her lawyer filed a liability suit seeking undetermined damages for the sudden, shocking, and painful incident that left her with a severe injury.

After a visit to the Haunted House of Horrors at Universal Studios in Florida, a woman sued them for psychological trauma. She claims she was chased with a chainsaw, albeit de-fanged, by one of the actors dressed like a Werewolf and fell. She sued not only the actor but also everyone else involved with the venue. She had no injuries from the fall, and subsequently, the court dismissed her injury claim. Psychological trauma, the court ruled, can be expected when visiting the Haunted House of Horrors.

Using the Flushmate III toilet proved explosive for many of its users, and the reasons had nothing to do with what they had eaten. A manufacturing error was the cause of these explosions, and many people were injured. Legal teams managed to get $5 million for the injured parties.

When a client took his pants to a Washington DC dry cleaner, he never imagined he would never see them again. He sued them for $54 million when they lost his pants because he said the company didn’t meet their “Satisfaction Guaranteed” promise displayed in-store. He also claimed the lost pants caused him mental suffering. Unfortunately for him, he lost the case.

Wherever Allen Heckard went, he was mistaken for the famous basketball star, Michael Jordan. The confusion caused him emotional issues, and he filed a personal injury claim against Michael Jordan and Nike. There was no resemblance with the sports star, and the claim was dropped.

A lion mauled during a big game hunting safari in Africa decided to sue the ammunition manufacturer, Federal Cartridge Co. The plaintiff was seriously injured when the bullet he fired at the charging lion failed to stop the animal after hitting it in its shoulder. The angry lion attacked and mauled the hunter. A federal court dismissed the case.

A couple from Massachusetts wanted compensation because they suffered emotional distress and loss of companionship after losing seven sheep to a neighbor’s violent dogs. The damages sought by the plaintiffs amounted to $140,000, but the court ruled for the offer the monetary value of the sheep. Eventually, the couple was awarded just $1 because they couldn’t produce evidence of their value.