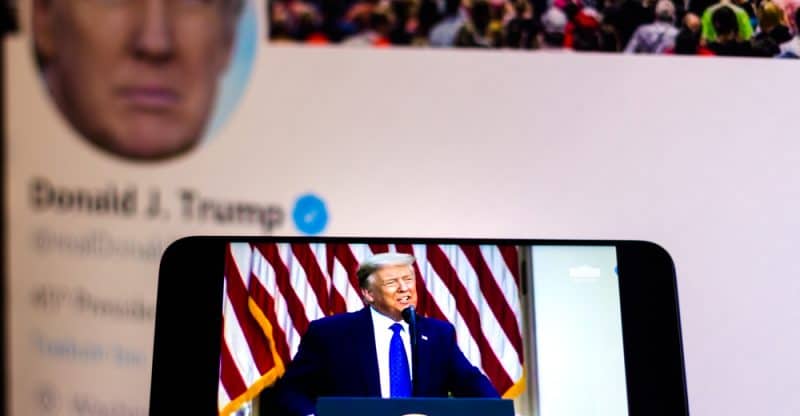 If you’ve been keeping up with the news lately, then you must know about the recently announced Presidential election results and the current state of tension among American citizens.

There have been mixed reactions from supporters, with some expressing excitement while others disappointed. Due to social media, it’s become relatively easy to express your support for a particular candidate. It seems like a harmless thing to do, right? Theoretically, yes.

However, what happens when your employers get wind of this information? Spouting politics online and at work can cost you your job. So, what happens if you openly support Trump in the workplace? Keep reading to find out whether being a Trump supporter can get you fired or not.

Contrary to popular belief, Federal law does not safeguard American employees from getting fired due to their political views. The First Amendment only prohibits the U.S government from impeding freedom of speech. Therefore, this law only protects government employees from losing their jobs based on political activities. There are no limits for the private sector, and you may get fired for declaring your political affiliations.

However, there are specific laws that, in certain situations, offer protection to private sector employees, such as:

All States except for Montana are at-will employment states. This presumption means that employers can dismiss their employees without good reason and not suffer legal liability. The termination should, of course, not violate any state or federal laws such as those mentioned earlier.

Several States in the U.S prohibit employers from discriminating against their workers based on political affiliations. These include:

These are rules that grant several agencies the mandate to regulate and apply laws—for instance, the I.R.S.  Internal Revenue Code, section 501(c)(3) prohibits all political activity except non-partisan. Other agencies, such as the Department of Interior and the American Foreign Service, ban political actions at work, as per the Hatch Act, 5 U.S.C. §7323(a).

Can Your Political Affiliation Get You Fired?

Here are a few scenarios that could help answer your question.

In 2016, Hollywood actor Antonio Sabato Jr during his interview with Variety stated that his support for Trump cost him his job. He said that he got blacklisted then his talent managers later dropped him. As a result, he had to sell his assets to pay back all his debts. He eventually had to move to Florida to look for employment to support his family. Since then, he has been unsuccessful in getting new acting gigs.

In 2018, Michael Dale from Indianapolis filed a discrimination lawsuit, stating wrongful termination due to openly supporting Trump. He said the issue began when he wore a MAGA hat to work in 2016. Dale also claimed that after that incident, the AFSCME leader from Local 725 pointed out Dale’s support towards Trump during a work meeting. He later lost his job in April 2018 and filed the lawsuit a few months later.

Early this year, a school district in Michigan sacked Mr. Kucera, a sports coach from the Walled Lake high school. This dismissal was after Mr. Justin Kucera posted a tweet supporting Trump. Kucera said that the school scheduled a zoom meeting asking him to resign or else get fired. When he refused, he got a termination notice.

Recently, just before the concluded elections, Dave Sunderland got fired from his job at the Newport News Shipbuilding in Virginia. The reason being that despite receiving several warnings, he refused to take off his MAGA hat. According to the company’s spokesperson, the company policies prohibit staff from participating in political campaigns, messages through clothing during work hours.

An article by the Silicon Valley Business Journal reiterated the California state law that prevents employers from interfering with employees’ participation in political activities. Also, according to California Labor Code Sections 1101 & 1102, an employer shouldn’t terminate or threaten to fire their staff in a bid to coerce them to vote for a particular candidate. Therefore, even if your employee decides to put a MAGA sticker on their car, the California law prevents you from dismissing them.

While supporting Trump is not a crime, it is clear that it could cost you your job. Because the law in many states does not protect you from dismissal due to political affiliations, it isn’t easy to file a wrongful termination lawsuit. Therefore, it’s upon you to decide whether stating your beliefs outweighs all future consequences and potentially seeking legal action.

Can my employer fire me for supporting Trump?

While supporting Trump is not a crime, it is clear that it could cost you your job

Can you be fired based on political views?

Yes, free speech prevents federal government from acting against your beliefs. Private employers are entitled to have their own beliefs and hire those that agree with them. California and other local laws may protect you.

Can I be fired for wearing a political shirt?

Yes. Unfortunately, the First Amendment protects you from government interfering with your speech. Employers can make their own rules. Employers also have a legitimate right to keep a harmonious work place

Can you be fired for political beliefs New York?

Can an employer ask your political affiliation?

Can you be fired for political views UK?

It is legal but a tribunal could find in your favor and determine that your termination was unfair.

Can an interviewer ask who you voted for?

Employer should not ask. If it is discriminatory against race, gender, sexual orientation or other protected status it is illegal. Otherwise it is dependent on locality.