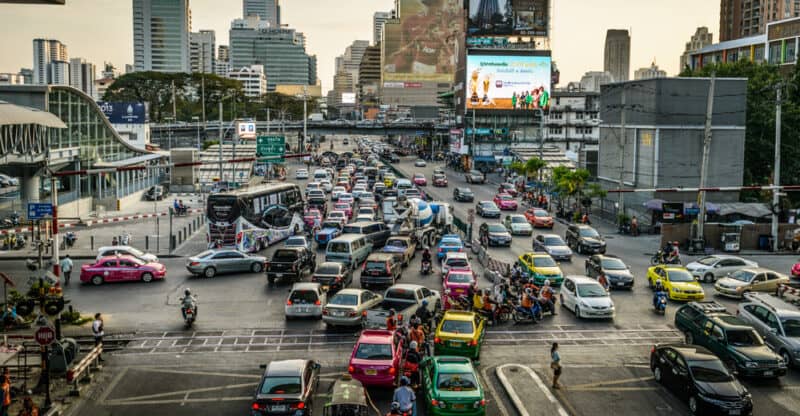 Nobody likes gridlock. Lines of cars blocking an intersection because they have nowhere to go on the other side cause plenty of frustration for other drivers and worsen the traffic problem.

The California State Legislature dislikes gridlock so much that in 1987, it passed the Anti-Gridlock Act seeking to ban this practice. Since then, driver’s education courses have instilled the importance of avoiding gridlock in students.

However, what does the California anti-gridlock law actually ban, and what are the penalties for drivers caught breaking it, even unwittingly? Here is everything you need to know about the state’s anti-gridlock law.

What Does the Anti-Gridlock Law Ban?

According to Section 22526(a) of the California Vehicle Code, “Notwithstanding any official traffic control signal indication to proceed, a driver of a vehicle shall not enter an intersection or marked crosswalk unless there is sufficient space on the other side of the intersection or marked crosswalk to accommodate the vehicle driven without obstructing the through the passage of vehicles from either side.”

The purpose of this law is to prevent traffic jams from worsening. When a vehicle crosses an intersection but doesn’t have enough space on the other side to proceed, it blocks cars going in the other direction from moving even when the light turns green. This is considered bad manners among drivers, but it is outright illegal in California and has been for decades.

What About Vehicles That Are Turning?

The anti-gridlock law also applies to drivers making turns at an intersection. So even if you have a blinking yellow light that allows you to make a turn, you still have the responsibility to check that there is space for you to proceed on the cross street before turning.

When turning left, you also need to be mindful of other vehicles that obey the anti-gridlock law. If you are turning and oncoming traffic is stopped, check that they are stopped because of the stoplight and not because they follow the anti-gridlock law. A common cause of accidents is people turning while mistakenly believing that they are in the right, and then the vehicles in the opposite direction going straight because space has cleared out for them.

On What Roads Does the Anti-Gridlock Law Apply?

The California anti-gridlock law applies on all roads and marked pedestrian crosswalks. Even if you do not see a posted sign reminding you to obey the anti-gridlock law, you are still expected to obey it as it is a statewide law that has been on the books for decades. Even if an intersection is so small that it does not have a traffic light or a stop sign, you must still maintain your spatial awareness.

The anti-gridlock law also applies to railroad crossings. You may not cross a railway track unless there is enough space on the other side for your vehicle to travel, leaving enough room for any railroad vehicle to pass behind you.

This application of the law is essential not just for preventing traffic but for vehicular safety. An oncoming train may not have enough space to brake if there is a car blocking the tracks. Getting stuck on the tracks when the railway crossing ramps come down could be lethal. That is why the fees for blocking a railway crossing are higher than the penalties for violating the law on a regular street.

However, you do not have to follow the anti-gridlock law on private driveways.

How Is the Anti-Gridlock Law Enforced?

The anti-gridlock law applies to all intersections in the space of California, regardless of their size or any posted sign reminding drivers of the law.

Even if you do not see traffic police present at an intersection, that does not mean that you are safe from a gridlock ticket. Many cities have installed traffic cameras at busy intersections, and you could have a nasty surprise sent to your home.

The base penalty for violating the Anti-Gridlock Act is a fee of $285. However, suppose there was an anti-gridlock sign posted at the intersection. In that case, the consequences are more severe because a driver is considered to have failed to obey a traffic sign, another infraction. The fee will be higher and you may even lose points on your license.

If you believe that you were given a ticket unjustly, you can contest the citation in court or with a written declaration. Again, the assistance of a traffic ticket lawyer can help you build your case.

When crossing a busy intersection in California, you have to be particularly careful. If you do not have enough space to clear the side street or crosswalk, not only will you earn the ire of other drivers, but you will also be violating a state anti-gridlock law. Even if there is no posted sign reminding you of the ban, traffic signal, or traffic cop to write a citation, you could still get a ticket sent to your home.