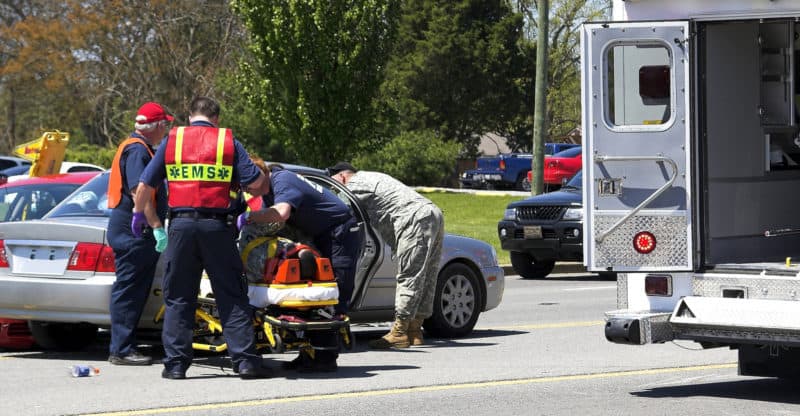 Three first responders in Hendersonville, TN were working the scene of an accident when they were struck and injured by another vehicle. The incident recently took place at Drakes Creek Road and Shackle Island Road in Hendersonville.

All three first responders are recovering from their injuries.

“The vehicle actually that was in traffic pulled out of traffic and sideswiped another car and ultimately ended up striking an ambulance in its course and three responders were injured,” said THP Sergeant Travis Plotzer.

Calvin Emmanuel II was driving north when traffic came to a stop near the scene of an accident. Authorities say Emmanuel backed up and hit another vehicle before using the southbound lane to get around traffic. He continued until he hit an ambulance carrying a patient, sending an EMT barreling out of it.

Before hitting the ambulance, Emmanuel ran over the foot of one first responder who was attempting to get the man to slow down.

Police say Emmanuel was driving on a suspended license.

Plotzer had a message for drivers passing by accident scenes.

“Whenever they see these flashing lights, try and slow down. Slow down for those folks out here working. Be mindful there’s probably someone outside their vehicle and that person has a family they want to go home to,” said Plotzer.

The injured first responders are expected to be okay.

The incident comes just one week after another worker was hit and killed while on the side of road on I-24.

“Obviously, we’ve lost another highway worker, and local agencies lost officers and stuff, but the highway patrol hasn’t lost anyone so far in 2017,” said Plotzer.

But Plotzer warned that if drivers do not start paying attention, particularly at night, and obey traffic laws, more first responders will be injured while trying to do their jobs.

Plotzer said that while first responders have different roles, they all have the same goal of helping people.

“And that’s what makes it really tough when they’re out here trying to help someone and they get injured in the process,” said Plotzer.

First responders say they often see distracted drivers pass by crash scenes and worry that it may lead to even more accidents.

Martin Bowers, Shackle Island Fire and Rescue Chief, said his team takes all the necessary steps to protect themselves.

“We all wear vests. We’re all visible and we wear turnout gear. We do everything to protect ourselves and we try to position our fire equipment to protect the scene so nobody else gets hurt,” Bowers said.

The incident is still being investigated by officials as a possible medical-related incident. Officials are reminding drivers to move over if they see someone on the side of the road. Failing to obey traffic laws could cost drivers $500 in fines and 30 days in jail.

The driver who hit the first responders has been charged with driving on a suspended license.