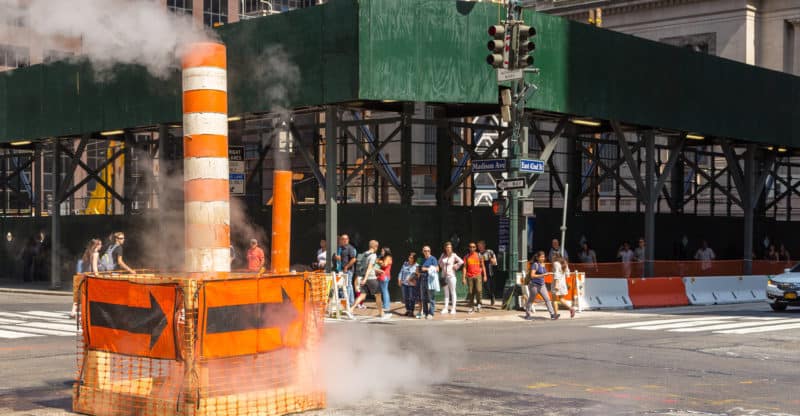 An 86-year-old pipe lined with asbestos exploded in the Flatiron District last Thursday. The explosion forced the evacuation of four dozen buildings amid concerns that carcinogenic debris thrown several stories high could have gotten into air conditioners and nearby buildings.

The air at the site of the explosion is safe, Mayor Bill de Blasio said, but debris that has been found on the ground has tested positive for asbestos.

Of the 49 buildings evacuated along the site of the explosion, 28 of them were considered to be in the “hot zone.” In total, 500 people have been displaced from 250 units.

Those who have been evacuated should not return to their building until the city has concluded its testing for asbestos and determined whether remediation will be necessary. The New York Times explains that if any surfaces have been contaminated with asbestos, the Department of Environmental Protection will seal off the areas and decontaminate them. Any absorbent materials that have been contaminated, such as furniture and carpeting, may need to be removed and destroyed.

The city has set up decontamination sites on 22nd and 19th streets, both on Fifth Avenue, to assist those who are concerned they’ve been contaminated.

The explosion forced at least 50 ground-floor businesses to remain closed, according to estimates from the Flatiron/23rd Streed Partnership Business Improvement District.

Authorities are still trying to determine the cause of the blast.

The explosion comes exactly 11 years after a steam pipe explosion near Grand Central station during rush hour. The blast sent debris 40 stories into the air. In that case, an 83 year-old-pipe near the station had failed.