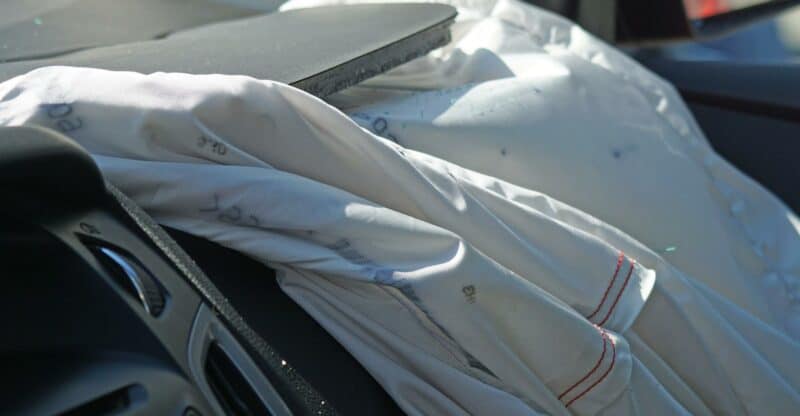 Can You Sue For Airbags Not Deploying? Yes.

A defective or malfunctioning airbag claim is valued based on the severity of the personal injuries sustained in the car crash at issue. The difference is there may be significant additional damages available to an accident victim because the airbag manufacturer can be held liable for a defective product which caused or added to the overall injuries suffered in the accident.

Airbags aim to keep your head and upper torso from colliding with the steering wheel or dashboard.

Approximately a second after the airbags fill, they begin to deflate due to holes in the airbag, allowing it to move out of your way. What happens if the airbags failed to deploy?

If your airbag didn’t deploy, how much may you sue for? The recovery compensation amount will depend on several factors, including the severity of your injuries, the state in which the accident occurred, and the specific circumstances of your case.

Suppose you’ve been injured in a severe crash due to airbag malfunctions, or accident-related damage. In that case, it’s essential to speak with an experienced car accident lawyer or personal injury lawyer as soon as possible.

A car accident attorney can help you understand your legal rights and options and will fight to get you the compensation you deserve.

Injury from an airbag deployment is not as straightforward and specific to one type of injury. Many different types can occur, making it difficult for doctors or auto manufacturers who want a “one size fits all” solution when treating these patients. Some common ailments include:

The airbag is a tricky mechanical instrument thats meant to preserve life and prevent injuries, but that doesn’t mean there aren’t legal repercussions.

Suppose you get injured in an accident because your vehicle didn’t deploy its safety device. In that case, the manufacturer should be held accountable for a breach of duty towards both drivers and passengers who this nifty little invention could’ve protected.

Lawsuits Over Defective or Malfunctioning Airbags

Airbags have been the subject of lawsuits since they were first introduced in the late 1980s.

The most common complaints involve injuries sustained when the airbag deployed, either because it was defective or because it deployed too forcefully.

In some cases, people have also sued because an airbag failed to deploy when it should have.

One of the earliest and most well-known lawsuits involving an airbag was filed by a woman named Cathy Bullock in 1989.

Bullock was injured when her car’s airbag was deployed while driving at a relatively low speed. She suffered severe burns and permanent disfigurement as a result of the incident.

In 1998, another woman named Barbara Schwarz filed a lawsuit after an airbag injured her. Schwarz’s case was notable because she was not actually in a car when the airbag deployed.

Instead, she was standing next to her car when another vehicle hit it, causing the airbag to deploy and strike her.

More recently, in 2012, a man named Gurjit Singh filed a lawsuit against Honda after an airbag injured him.

Singh’s case was notable because it was the first time a person had sued Honda over an airbag-related injury.

As you can see, there have been numerous lawsuits involving airbags over the years.

In most cases, the victims of airbag-related injuries have successfully recovered damages from the manufacturers of the airbags.

If an airbag has injured you, you may consider contacting a personal injury attorney to discuss your legal options.

Airbags are designed to protect vehicle occupants in a collision, but they are not infallible.

Over time, airbags can degrade and become less effective or even fail altogether. Here are some common causes of airbag failure:

Factors Considered When Determining The Value Of A Defective Airbag Case

The amount of money you can receive for a defective airbag case will depend on many different factors. Some of these include:

The Severity Of Your Injuries

If you have suffered severe injuries due to a defective airbag, you may be entitled to more compensation than if your injuries are less severe.

Whether You Have Lost Any Wages

If you have had to miss work due to your injuries, In addition to other damages, you might be entitled to recover your lost salary.

The Cost Of Medical Treatment

If you have incurred significant medical bills due to your injuries, you may be able to recover those costs in addition to other damages.

The Long-Term Effects Of Your Injuries

Whether The Manufacturer Knew About The Defect

If the manufacturer knew about the defect and failed to warn consumers, you may be able to recover additional damages.

If the manufacturer has a history of manufacturing defective products, you may be able to recover additional damages.

These are just some of the factors that will be considered when determining the value of your case. An experienced attorney will be able to evaluate all of the elements in your case and give you a better estimate of what you may be entitled to.

Before suing a car manufacturer for a car accident case due to an airbag malfunction that leads to catastrophic injuries, it’s essential first to seek the help of a Car accident attorney. For a faulty airbag, you may have a product liability claim.

In a typical vehicle accident, the other motorist is at fault, and you have been injured. The truth is, experienced attorneys are your best chances of winning. In addition, they can help pursue legal action to recover compensation for damages.