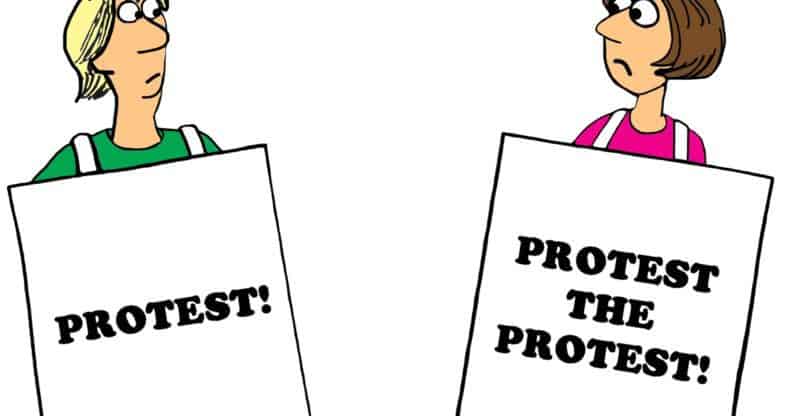 The bill was influenced by the months-long protest at the Dakota Access Pipeline, and is part of an ongoing effort to increase legal penalties for civil disobedience.

Oklahoma’s law takes aim at organizations “conspiring” with groups of protesters accused of trespassing, such as those Republicans have blamed for anti-pipeline protests, which have been expensive for local governments.

The law was approved Wednesday and rushed into immediate effect after being declared an “emergency” situation.

The legislation increases penalties against protesters trespassing on a property containing a “critical infrastructure facility.”

The law’s definition of “critical infrastructure” includes varying types of fossil fuel facilities, such as pipelines.

Protesters could face a fine of $10,000 and up to one year in jail if the intention is to halt the progress or interfere with operations. That penalty jumps to $100,000 in fines and 10 years in jail if a protester successfully damages, defaces or vandalizes equipment.

Those protesting would face a fine of at least $1,000 just for trespassing.

The law will affect both protesters and “conspirator” organizations. Organizations would face fines ten times greater than an individual protester. In cases involving damage, the fine could be as high as $1 million.

The bill is aimed directly at organizations attempting to halt or delay the Diamond pipeline, an All American Pipeline and Valero project. The pipeline will transport oil from Oklahoma to Tennessee.

Protesters have already begun demonstrating against the pipeline, which is slated to be complete by the end of the year.

On the same day Governor Fallin signed the trespassing bill into law, lawmakers approved House Bill 2128, which extends civil liability to a people or organizations that “compensate” protesters found to be trespassing.

Rep. Mark McBride, author of the bill, said the liability provision would apply to people or organizations who provided lodging to those arrested for trespassing.