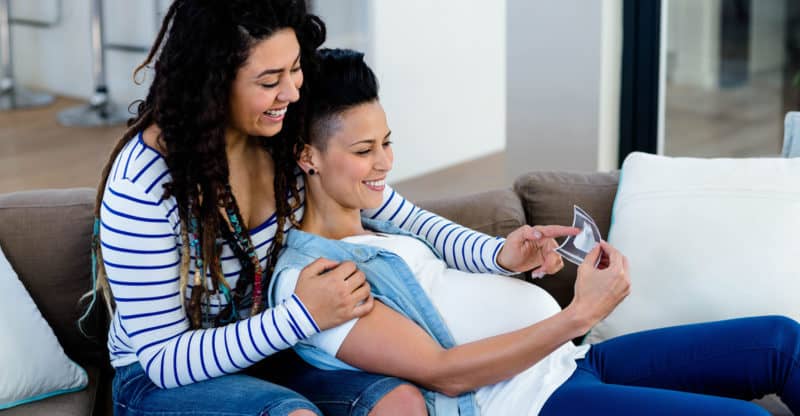 Gov. Haslam signed into law a bill that mandates all words in the state’s legal codes be interpreted to have “natural and ordinary” meaning. This rule applies to words like “mother,” “wife,” and “husband.”

The couples filing suit say the language interpretation may interfere with their parental rights.

The four couples have all conceived children using a sperm donor and are expecting children later this year. The couples argue that under Tennessee law, husbands are automatically given legal rights to a child conceived with donated sperm. The lesbain couples say the law doesn’t guarantee them the same right due to the new language law.

“Because the Legislature has shown that they are not interested in protecting these families and children, these couples have no choice but to ask the courts to protect them,” said lawyer Julia Tate-Keith.

Speaking with NBC News Monday, Tate-Keith said now that the Supreme Court has approved same-sex marriage, couples need to be treated the same as straight couples, including parentage.

The suit alleges that the law violates equal rights and due process protections.

“The Petitioners seek the same protection under the law that husbands conceiving with donated sperm are afforded by Tennessee statutes,” the filing reads.

The law comes after legislators filed a motion to intervene in a lesbian custody battle in Knoxville last year. A number of bills have sought to limit the definition of “husband” and “wife.” While the law does not specifically mention LGBT couples, the intent, critics say, is clear.

The law reads: “Undefined words shall be given their natural and ordinary meaning. Without forced or subtle construction that would limit or extend the meaning of the language, except when a contrary intention is clearly marked.”

The couples are seeking an order that would set precedent that spouses of pregnant women, regardless of gender, would be considered legal parents.

Tate-Keith said the plaintiffs “only want a declaration that the non-biological mothers are parents, too.”

“We are very concerned for the judicial chaos this bill unleashes and its discriminatory impact on LGBT people in Tennessee,” said the Tennessee Equality Project in a statement.

The couples are seeking a hearing on the case before their children are born.

In a statement, Governor Haslam said, “This legislation passed three-to-one in the House and nearly four-to-one in the Senate. Using a word’s ordinary meaning is a well-established principle of statutory construction. While I understand the concerns raised about this bill, the Obergefell decision is the law of the land, and this legislation does not change a principle relied upon by the courts for more than a century, mitigating the substantive impact of this legislation. Because of that I have signed HB 1111/SB 1085 into law.”

Haslam contends that the law will not change how the courts interpret legal precedent.

Senator John Stevens, the bill’s sponsor, asserts that the purpose of the legislation was to maintain the meaning of undefined words when they were put into law.

“The language of this bill is for a general definitions section of the Tennessee code, which defines ‘road’ and ‘sheriff,’ among other common terms,” said Stevens. “For at least 150 years, courts including the Tennessee Supreme Court and United States Supreme Court have looked to a word’s natural and ordinary meaning when deciding cases.”

Critics argue that the law will put LGBTQ families at risk and may even nullify a transgender individual’s identity.

If the suit is unsuccessful, LGBT couples in Tennessee may face challenges when it comes to health insurance, custody, Social Security and more.