What is The Difference Between Criminology and Criminal Justice? 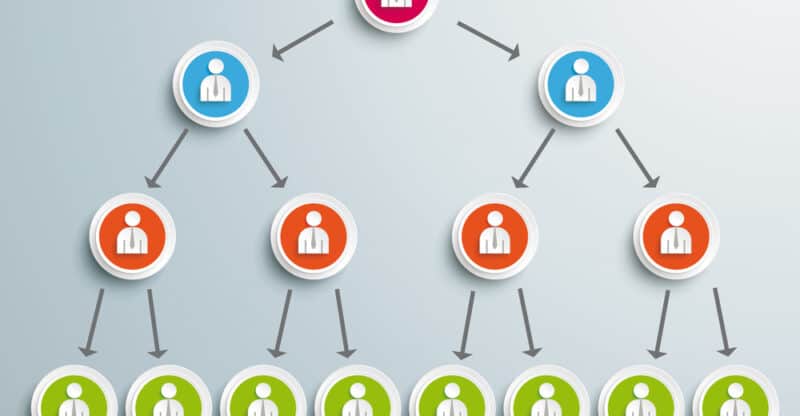 The many forms and sizes of pyramid schemes often make them difficult to recognize at the start. However, they all share one dominant characteristic: the promise of large profits to investors on recruiting others. Sometimes a product is used to disguise the pyramid scheme.

Ponzi schemes are closely related to pyramid schemes. However, they don’t offer profits but are based on collecting payments from people, promising a high rate of return on their investment over a short-term period. Typically, they take money from new investors to pay off older ones.

Both schemes manage to seduce people initially. However, they are illegal because they inevitably fall apart, with the investors or consumers at the bottom levels losing the most.

Some of the most famous pyramid schemes in U.S. history

Koscot Interplanetary was a company from Orlando, Florida, selling mink oil-based cosmetics and was started by Glenn W. Turner in 1967. Unfortunately, the multi-level cosmetic company became entangled in numerous legal difficulties and went out of business in the 1970s. Turner later moved on to operate another motivational company, Challenge Inc., only to be sentenced to seven years in prison in 1987 for using a pyramid scheme for fraud and conspiracy.

Another multi-level marketing company from the 1960s is Holiday Magic. Founded by William Penn Patrick, the company initially distributed home-care products and cosmetics. However, the company was forced to close in 1974 after it was found guilty of fraud, and it was mandated to compensate the people it defrauded by tricking them into joining the company.

Metabolife International was a multi-level marketing company based in San Diego, California, manufacturing dietary supplements. Despite the hundreds of millions of dollars earned from one of its products, the company eventually went bankrupt in 2005 and was forced to close.

United Sciences of America was an American company with a diversified portfolio that sold supplements through multi-level marketing. Developed by Robert Adler, a Dallas businessman, the company promoted these supplements as protection against cancer and the newly discovered AIDS.

They even had celebrity endorsements for their supplements, including Master Formula, Calorie Control Formula, and a Fiber Energy Bar. Unfortunately, sketchy advertising, fraudulent claims, excessive research grants, and enormous consulting fees led to the company’s collapse in 1987, when high-profile members distanced themselves from it.

Founded in 1991, Equinox International was another multi-level marketing company. Headed by Bill Gould, the now-defunct company had a turnover of $ 195 million in 1996. Before pouncing in, the FTC watched them for ten months to gather sufficient evidence to prove that it was another pyramid marketing scam. Equinox International settled a court case with a penalty of $40 million in 2000.

BurnLounge was an online music store founded in 2004 that relied on multi-level marketing.  By 2006, Burn Lounge was declared a pyramid scheme by the Federal Trade Commission, FTC, and forced it to return $ 1.9 million to its customers.

Consumer goods and services were once again the focus of another multi-level company called Fortune Hi-Tech Marketing. Based in Lexington, Kentucky, the company was founded in January 2001 and shut down 12 years later by the Federal Trade Commission.

Another famous pyramid scheme in the U.S. was the WakeUpNow multi-level marketing scheme. Based in Provo, Utah, the company was founded in 2009 by Troy Muhlestein. WakeUpNow sold various products and services based on health and financial management. After 160 complaints made to the FTC, it was found the products sold were available cheaper or for free elsewhere, and the company was closed in 2015.

MonaVie was founded in 2005 to make and distribute health products made from blended fruit concentrates. Several controversies surrounded the company, including health claims for its products that lacked scientific backing or approval from regulatory authorities. It wasn’t the first time its chairman, Dallin Larsen, was involved with false health claims concerning a beverage. Unable to pay its debts of $182 million, the company was forced to close permanently.

Solavei was a social commerce network for users and a contract-free mobile service in the United States. Known for its incentivized referral plans, the company also used social network advertising programs. Customers were paid for referrals. Founded by Ryan Wuerch in 2012, Solvei went bankrupt in 2015.