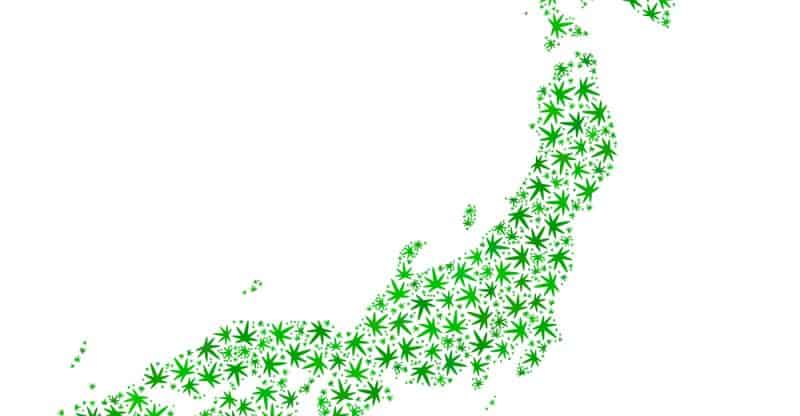 Before 1948 Japan valued cannabis for its spiritual, medicinal, and practical uses. Cannabis legislation is changing globally, but Japan continues to treat it like a dangerous substance.

Is weed legal in Japan?

No. Since the Cannabis Control Act in 1948, it has become illegal to possess marijuana in Japan. The U.S. introduced the law when it occupied Japan after the Second World War, without any significant changes since.

Before introducing the Cannabis Control Act, the hemp plant grew prolifically in Japan, and the country experienced no problems with abuse.

Due to the intervention of Japan’s Emperor, the hemp industry was saved at that time. He secured hemp permits, and hemp is still grown in Japan today. Unfortunately, hemp farmer numbers have continued declining since the 1950s. Their numbers have dwindled from over 35,000 to less than one hundred. This slump is attributed to the expensive cultivation licenses and receding demand for natural fibers.

The most straightforward hemp cultivation license to obtain in Japan is to grow low-THC hemp, but farmers are keen to see changes in the law, making it easier for them to develop the plant. Many argue that changes would help boost Japan’s agricultural sector and hemp is a sustainable crop that could benefit the environment.

What does Japanese law say about cannabis possession and use?

In Japan, anyone caught in possession or using marijuana faces a prison sentence. One of the biggest deterrents is the risk of being stigmatized. Social punishment is not uncommon, and people can be excluded from educational institutions and even lose their jobs because of possession or use.

Paul McCartney, the former Beatle, was banned from entering Japan for eleven years after being busted for bringing 7.7 ounces of marijuana into Japan in 1980. Toshiba withdrew its sponsorship from a national team after one of Japan’s national players was caught in possession. Possession also cost actress Saya Takagi. All her shows were removed from television. Since then, she has become a strong proponent of legalized cannabis.

Selling, importing, growing, or being caught with an amount of cannabis likely to be used for personal gain raises the prison sentence between seven and ten years. Depending on the circumstances, offenders can also receive fines of 2 million yen for possession to sell and 3 million yen for importing or growing cannabis.

What’s more, when Canada legalized cannabis in 2018, the Japanese government issued warnings that it is also illegal for Japanese nationals living abroad to use cannabis outside of Japan. Of course, that law would be complicated to police, and no known actions have been taken so far.

Japan and CBD, the cannabis derivative

Since 2016, the sale of CBD has been permitted in Japan, and some companies can produce CBD products. Still, the stringent laws have affected businesses, and consumers lack awareness of its purported therapeutic benefits.

However, demand for cannabis is increasing, and Japanese business owners are inventive in their ideas. Priyanka Yoshikawa developed a CBD skincare line, and Kota Shimomura is the owner of CBD Coffee in Tokyo. Shimomura believes the industry will surpass the tobacco industry within five years. Yoshikawa recently told Cannabis Health Insider, “We are a nation of workaholics that need relaxation and one-on-one time.”

Strict laws cannot prevent legalization advocates from fighting to see changes to the legal status of marijuana in Japan. These advocates include Green Zone Japan and the Japanese Clinical Association of Cannabinoids.

Green Zone aims to educate the public and keep medical professionals up-to-date with medical cannabis information. Meanwhile, the Japanese Clinical Association of Cannabinoids was established in 2015 and is officially partnered with the International Association for Cannabinoid Medicines. It aims to encourage and aid cannabinoid research in Japan.

However, it appears that even speaking positively about cannabis online can get one arrested in Japan. Just late last year, Japan Today reported the arrest of two people for encouraging illegal conduct by posting messages praising cannabis smoking on social media.

Their messages encouraged a blitz of pro-cannabis messages and led to their arrest. The man and woman admitted to violating the Act Concerning Special Provisions for the Narcotics and Psychotropics Control Act.

The enforcement of this ambiguous law is very rare and difficult. After all, many people are publicly advocating for the drug in Japan, including Saya Takagi.

The extreme laws surrounding “weed” are not deterring its use. Arrests for cannabis use are increasing, and over 40% of those arrested are in their 20s. Social acceptance is leading governments worldwide to review and revise their laws. Japan is an otherwise technologically advanced and innovative country that may eventually consider reviewing its laws concerning cannabis.

In what countries is weed legal?

Four countries have made completely legalized marijuana Canada, Georgia, South Africa, and Uruguay, plus 17 states, 2 territories, and the District of Columbia in the United States of America and the Australian Capital Territory in Australia. Other countries and states allow for medical use or have decriminalized marijuana (it is illegal but not enforced).

Is CBD allowed in Japan?

CBD is legal in Japan. You may sell or purchase it.

Is hemp legal in Japan?

It is legal to own or sell hemp in Japan. Research involving cannabis is prohibited. This includes hemp and CBD. Japan does not allow medical studies on CBD or any form of cannabis, including buds and leaves.

What country has the most weed smokers

What is the weed capital of the world?

The emerald triangle is considered the weed capital of the world. It is called the emerald triangle as those three counties in northern California is the largest cannabis-producing region in the USA. The region looks like an upside-down triangle.

How many teens smoke weed?

Statistics show that 1 out of every 7 teens have smoked marijuana in the past month. This is higher than a few years ago, as teenagers no longer feel that marijuana use is dangerous.

What is the penalty for weed in China?

According to the Law on Public Security Administration Punishments, anyone caught smoking marijuana is subject to detainment for up to 15 days and a fine of about $300.