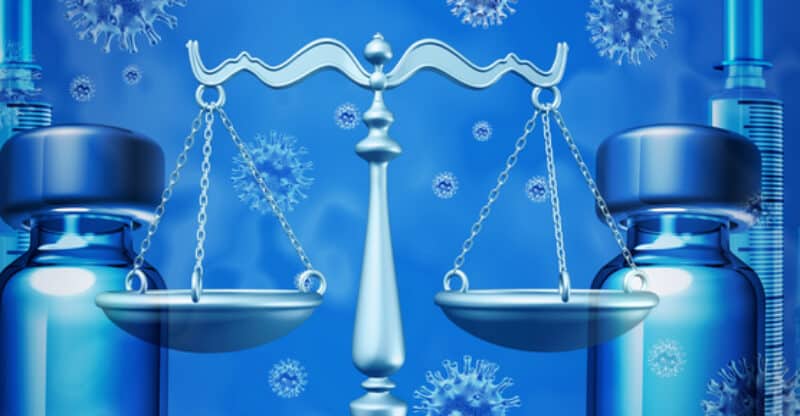 Vaccine mandates have been issued by a growing number of employees, both public and private. Sincerely held religious beliefs are often considered exemptions, but it is often difficult for employers to determine the legitimacy of some requests. Additionally, some states have announced that COVID-19 vaccines are mandatory for workers in some fields, with minimal medical and religious exceptions and frequently exemptions require unpaid leave.

According to the Catholic Church, vaccines are morally acceptable. Pope Francis has called getting a vaccine a way of “promoting the common good.” Other prominent religious leaders, including Muslims and Jews, are also encouraging their members to get vaccinated. Therefore, most religious exemptions against vaccines get complicated.

Employment discrimination based on religious beliefs or moral convictions is prohibited by Title VII of the Civil Rights Act of 1964. Therefore, employers are required to “reasonably” accommodate sincerely held beliefs held by their employees.  This does not apply to personal preferences or individual beliefs.

Employees seeking exemptions must submit written explanations with the correct documentation if the vaccine violates their religious convictions. These are then reviewed by human services staff to determine their validity. Employers must make a reasonable attempt to accomodate sincerely held religous beliefs or medical exemptions. Requiring employees to take unpaid time off may be necessary if employer feels that this will best protect the public and other workers.  Employer should make every effort to accomodate genuine religous or medical exemptions to the extent of their abilities.

About two-thirds of the private sector workforce is about to be affected by the stringent new federal rules on testing and vaccinating. Private companies with 100 or more employees are required to vaccinate or test their staff. Those who aren’t vaccinated must undergo testing for COVID-19 at least once a week.

However, many decisions within several industries are increasingly challenged. In several states, federal courts have been called to help decide issues on enforced vaccine mandates.

In Minnesota, close to 200 health care workers filed a federal lawsuit last month to stop the enforcement of the vaccine mandates by their employer. The request for an injunction was denied by a federal judge, primarily because most clients had already received religious exemptions, and some had requests pending. The remaining number of requests remains too few to merit an injunction. However, according to the Star Tribune, the decision doesn’t prevent the continuation of the lawsuit.

Recently, a federal judge ruled that employers in New York state must grant health care workers religious exemptions to the state’s vaccine mandate. Meanwhile, the lawsuit challenging them is still to be heard by the court.

Contrary to the above decisions, a Maine federal judge ruled that the state can prohibit religious exemptions as far as its health care workers are concerned.

Texas Governor Greg Abbot is the leader behind the challenge to the vaccine mandate for the 130,000 businesses affected by Biden’s decision. These requirements are unlikely to lead to a loss of employees in an already tight labor market, as few employees actually leave over vaccines. Employees who leave over mandates are generally ineligible for unemployment and will have difficulty finding employment elsewhere.

Abbot has already issued an executive order to obstruct the new rules for people who object because of religious beliefs, medical reasons, or based on personal conscience. Legal challenges are expected by nearly all GOP state attorney generals in the country, and many of them have already signed a letter of objection to the president.

In Florida, Governor Ron DeSantis recently said that the state legislature should pass a law to prevent people not wishing to be vaccinated from losing their jobs.

The discretion for granting an exemption for a vaccine mandate falls mainly to the employer. Moreover, many people have fallen into the trap of getting signed letters from websites offering these online at quite a price, letters that their employers can reject.

Whether the vaccination mandate lies within the powers of OSHA (Occupational Safety and Health Administration) or not, the goal is to protect people in the country from COVID-19. That is one of the reasons the opposition is strongly dismissed by the Biden administration, as federal law surpasses state laws.

In the words of Jen Psaki, White House press secretary, “The law requires the Department of Labor take action when there is a grave risk to workers, and the pandemic that has killed more than 600,000 people certainly qualifies.”

The Canadian human rights commission and EEOC has ruled that private and public employers can require vaccination.

Why do unvaccinated COVID-19 survivors need the vaccine?

Which COVID-19 vaccines are authorized in the USA?

The FDA has authorized three vaccines from Moderna, Pfizer / BioTech and Johnson and Johnson. The joint venture vaccine from Pfizer and Biontech has received full approval form he FDA. The other two vaccines are under emergency use authorization.

Does the vaccine reduce spread?