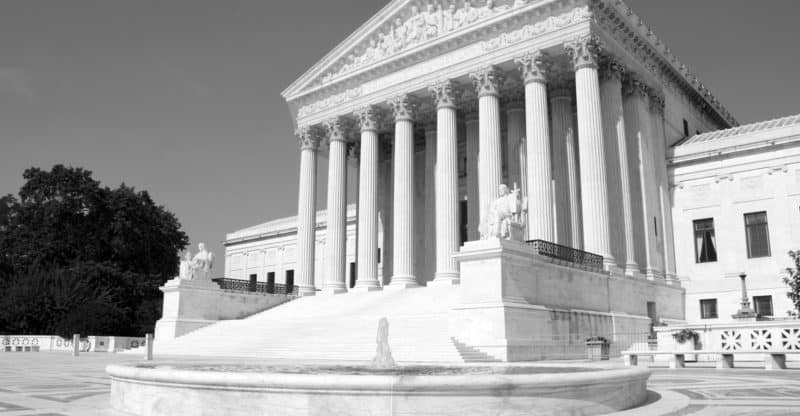 The U.S. Supreme Court hears roughly 80 cases each year and decides an additional 50 without hearings. Because the cases they hear address issues related to the constitution and federal law, the Court’s rulings shape America’s legal landscape and often have a significant impact on the everyday lives of Americans.

These six rulings had an exceptional impact on the U.S. and shocked countries around the world.

Brown v. Board of Education was a landmark case in which the Supreme Court ruled that racial segregation in schools was unconstitutional.

The decision overturned the previous Plessy v. Ferguson ruling in 1896, which determined that state-sponsored segregation was constitutional provided the facilities were “separate but equal.”

The decision was a major victory for the civil rights movement, and paved the way for integration.

Roe v. Wade was another landmark case in the Supreme Court on the issue of abortion. Norma McCorvey, who identified herself as “Jane Roe,” sued Dallas County DA Henry Wade over a law that made abortions a felony unless the life of the mother was in danger.

The Court agreed, and overturned any laws that made abortions illegal in the first trimester. In a 7-2 ruling, the Court decided that the right to privacy under the due process clause of the 14th Amendment extended to a woman’s right to have an abortion.

In a landmark decision, the Supreme court ruled in the Miranda v. Arizona case that statements made by defendants in police custody were only admissible at trial if the prosecution can prove that the defendant was informed of his or her right against self-incrimination and the right to an attorney before and during questioning, and the defendant understood these rights, but voluntarily waved them.

The ruling led to the establishment of the Miranda rights, which is now a part of routine police procedure to ensure that all suspects are aware of their rights.

At the center of the case was Ernesto Miranda, who confessed to a crime without ever being informed of his right to an attorney or against self-incrimination. Miranda’s attorney argued that, as a result, the confession should be rendered inadmissible. The Supreme Court agreed.

The United States v. Nixon case set a precedent that limited the power of the president of the United States. At the center of the case was the Watergate scandal, in which President Nixon attempted to use executive privilege over recorded conversations.

The Supreme Court ruled that Nixon had to turn over the recordings, which contained damaging evidence against Nixon and his staff.

In a 5-4 ruling, the Court maintained that freedom of speech prohibits the government from restricting political spending by nonprofit corporations. These principles have been extended to labor unions, for-profit corporations and other organizations.

United States v. Windsor was landmark case for civil rights in which the Supreme Court ruled that restricting the interpretation of “marriage” to only include heterosexual couples was unconstitutional, as per the In Defense of Marriage Act.

At the center of the case was same-sex couple Edith Windsor and Thea Spyer, who were legally married in Toronto, Canada in 2007. When Thea passed away in 2009, Edith was required to pay $363,053 in estate taxes because the federal government did not recognize her marriage.

In 2012, the federal government was order to issue a tax refund to Windsor after Judge Barbara S. Jones ruled that Section 3 of DOMA was unconstitutional under the due process clause of the 5th Amendment.