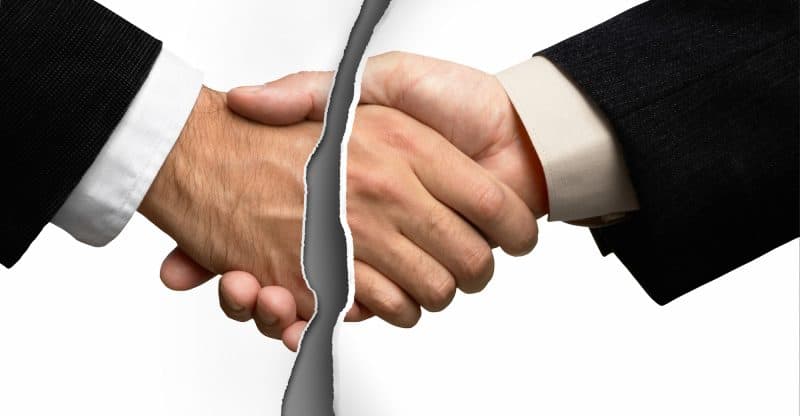 Comparing an Anticipatory Breach with an Actual Breach

The vast majority of breach of contract cases are going to call into one of two separate categories. They are either going to fall under the category of actual breaches or anticipatory breaches. When it comes to an actual breach, this takes place when one person simply refuses to fulfill his or her side of the contract. Or, that person might perform that task incompletely. There is usually a date in the contract specifying by which time the task has to be completed.

An anticipatory breach takes place when one party announces that he or she is not going to fulfill the contract by the due date that is listed on the contract.

A Minor Breach vs. a Material Breach

When it comes to breach of contract cases, they can also be categorized as either minor or material. A material breach of contract takes place if one party ends up with something that is far different than what was specified in the contract. For example, a web designer might be hired to set up a complete website that is supposed to serve as marketing material for a restaurant; however, what he or she received was a blog about the best type of candy. This would be considered a material breach of contract. In this case, the non-breaching party does not have to hold up his or her end of the bargain and should be entitled to seek damages a result of the breach of contract. In this example, the person who hired the web designed would not be forced to pay the designer for a job that was not completed.

Now that the various types of breach of contract cases have been covered, it is time to take a closer look at the damages that might be involved.

The Types of Damages Stemming from a Breach of Contract Case

When someone is the victim of a breach of contract case, there are two separate types of damages that might be available. Usually, these damages take the form of monetary compensation for any loss that the victim might have experienced. These two damages include:

Depending on the type of breach of contract case, the damages could be substantial. So, how is this going to play out when it comes to the pandemic?

These are just a few of the major issues that could develop as a result of the COVID-19 pandemic. All of these might lead to a potential breach of contract case. It will be interesting to see how the courts handle these cases as they get filed. They could set an important precedent for the future.

What About International Contracts: China

Breach of contract cases can extend into international business law as well. One of the biggest issues that might arise is a delay in delivery by Chinese suppliers, which could create a breach of contract status. Now, it is possible that this could create a situation known as a force majeure. This is an unforeseeable circumstance that causes one party to be unable to fulfill its obligations. Courts will have to determine if there was a real impossibiliy to fulfill the contract or if it became more expensive and difficult to fulfill.

It is important for everyone to read the contract carefully because some of the most common examples of a force majeure include:

While COVID-19 might fall under all three of these categories, it is still incumbent on the party activating the clause to prove that measures being used to combat the virus amount to the force majeure provision. Evidence that the force majeure clause applies include:

To confirm the existence of force majeure, it is important to contact the authority in the country where the contract was arranged. In China, this could be the China Council for the Promotion of International Trade. Anyone who is planning to lean on the coronavirus for breach of contract cases must document force majeure and use it in any legal proceedings.