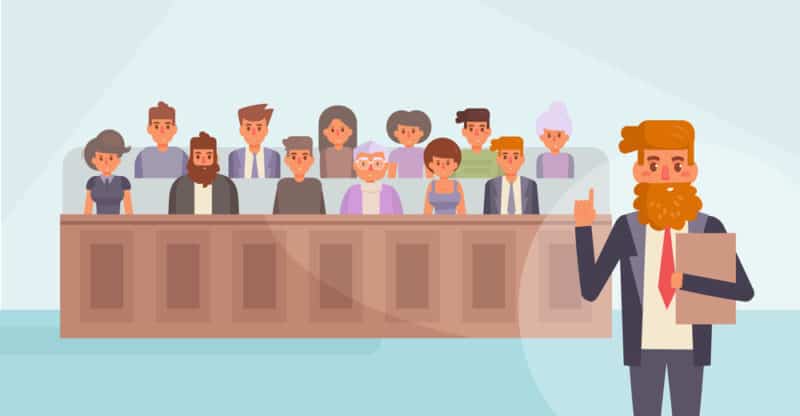 Individuals can face significant charges for missing jury duty with varying penalties in the different states. The potential consequences include jail time to hefty fines if you miss voir dire or jury duty.

However, there may be ways to legally get out of jury selection and defer your service, as long as you provide notice at least a week before the date of service. Then, to remain in good standing with the law, you can reschedule your jury duty for a few months later.

Make sure you read the jury summons notice in its entirety as it will explain all your duties and obligations under the law.

Selection Processes in the U.S.

When you register to vote in the U.S., you are automatically placed as a potential juror. Selection on a jury is random after that. Anyone summoned for jury duty doesn’t automatically become part of the jury, but they undergo a selection process to determine their capability to serve. The selection process is known as voir dire, and it involves questioning to identify any bias. After voir dire, those people not chosen are excused from the duty.

What is the Commitment Time of Jury Duty?

Depending on the trial, jury duty will vary, with an average of three to four days. However, some trials can be drawn out, taking anywhere from one day to several weeks, and this unpredictability is why it is inconvenient for some people.

Legally Getting Out of Jury Duty

When you try to get out of jury duty, there is a level of risk of being held in contempt of court. However, there are several legal ways to potentially get out of it.

The compensation you receive serving as a juror may not be enough to sustain your family if your employer does not pay you for the days missed at work. Remember, employers do not have a legal obligation to pay employees. However, you will have to prove that this loss in income will be detrimental by showing your payroll and possibly your last tax return before a court considers excusing you.

Students, full-time and part-time students attending an accredited tertiary educational institution, are eligible to be excused in most states. However, check the regulations before applying because it does not apply to all states, e.g., California.

If you have a planned surgery or significant doctor’s appointments already scheduled, then you may be  excused if missing them could harm your health. However, you will most likely have to present proof before getting excused from jury duty.

In some states, residents over 70 don’t need to participate in jury duty. However, first, check before seeking an exemption.

Being vocal, opinionated, hostile, or a know-it-all often makes lawyers uncomfortable because they are unsure if the evidence will persuade such a person. You can try this risky tactic to get yourself excused, but don’t expect this to be easy or automatically work.

A documented mental disorder typically will get someone excused, but a recent family loss, divorce, etc., may also be a valid excuse if you are going through a difficult emotional time. However, you will have to give the court details, and possibly in a public setting.

Speak up if you know something about the case or someone involved because this is a legal excuse not to serve as a juror, including relatives, employers, or any other personal relationship, even with a witness. The same may apply to a specific bias about the case; tell the court, which may excuse you.

In some states, those working in the public service sector are usually excused, including police officers, government officials, lawyers, and doctors, because their experience and industry knowledge can influence their views, depending on the type of case being heard.

8. Recently Served or Need to Put the Date off

If you have served in a federal or state trial within the past two years, there is a good chance you will be excused from jury duty. Check the summons or notice you received in the mail for details.

Sometimes, the summons comes at an inappropriate time, making it difficult for you to serve. You can ask to push the date forward for up to six months, but typically you must make such a request at least a week before the date you must appear.

In many states, pregnant women can use the medical excuse because of planned medical appointments and unforeseen issues during their pregnancy, as long as you inform the court. Breastfeeding mothers are also often excused by courts.

The primary caregiver to young children must prove that no one else can care for them and that daycare is not an option, creating hardship if they participate in their jury duty.

In some states, small business owners may show the court that jury service can affect their livelihood by negatively impacting their business, especially if they don’t have employees.

In addition, courts with jurisdictions in a particular county don’t typically accept jurors residing in another county. If you have moved, let the court know before your summons date, and you may be automatically excused.

Depending on what state you live in, a valid excuse may allow you to get out of jury duty and in all states, there clear ways to defer your jury service. Most importantly, read the entire summons or jury notice you received in the mail as it will have instructions for how to postpone or seek an exclusion from jury service. Also, judges are willing to listen if you speak up and explain the hardships jury duty can sometimes cause.

How do you avoid or postpone jury selection?

You may avoid jury selection by asking to be excused for a medical or religious reason. If you are not excused, you can still try to get out of jury duty by claiming that you have strong feelings against the death penalty, are biased against law enforcement, or have some other bias that would keep you from being a fair juror.

Postponement of jury service is normally handled by following the instructions in your jury summons or notice you received in the mail.

What do you say to get out of jury duty?

There are no magical words or surefire way to get out of jury duty, but you can try to persuade the court that you are not qualified or eligible to serve. Some reasons you might give for being disqualified from jury duty include: being a non-citizen, being under 18 or over 70 years old, not meeting residency requirements, having a mental or physical disability that would prevent you from serving, or being convicted of a felony.

How do I get out of jury service UK?

You’re not a British citizen or resident.
You’re not of sound mind.
You’ve been convicted of a crime.
You work in law enforcement or the legal profession.
You’re not fluent in English.
You have an illness or disability that would prevent you from fulfilling your duties as a juror.
Your employer can’t release you for the length of the trial.
There are others, but these are some of the most common reasons

How do you get out of jury duty in Canada?

There are a few ways to get out of jury duty in Canada. One way is to be physically unable to serve
on a jury due to illness or disability. Another way is to be over the age of 65. And the last way is to have a valid excuse, such as having pressing work or family obligations.