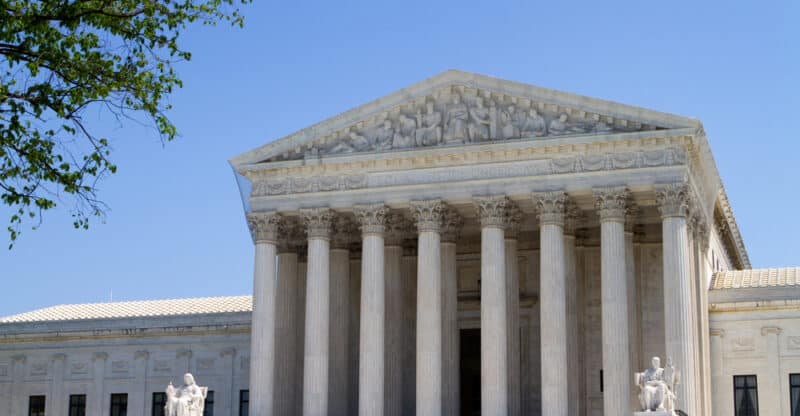 The first Monday of October marks the beginning of the annual term of the Supreme Court. This is where some of the most consequential political and legal questions are decided by the nine justices.

Decisions made by the Supreme Court include Obamacare, gay rights, voting rights, student-athletes, and free speech. Decisions yet to come in the 2021-2022 term of the court include abortion, guns, and the shadow docket.

Supreme court decisions are only final once the justices release them to the public.

Conservative and liberal justices were on opposite sides during oral arguments, with five out of the six conservative justices appearing ready to overturn Roe. Chief Justice John Roberts asked questions suggesting he was in favor of giving states more power to choose rather than overturning Roe completely.

Overturning Roe can have quick and undesirable consequences since many states appear ready to implement some forms of abortion bans. Abortions rights are explicitly protected in some states, but others could face some major political battles.

The Supreme court also heard arguments for Whole Woman’s Health v. Jackson in early December. A narrow opening was allowed by the court for abortion providers in Texas to challenge the state’s controversial rewards law in the federal court. However, the Supreme Court refused to stop the enforcement of the law as litigation continues.

Anti-abortion activists are still worried that any of the justices could be a change of heart. This has happened once before in 1992 in Planned Parenthood v. Casey. At the time, the fifth judge changed his mind, keeping abortion rights intact for three decades. The conservative majority in the Supreme Court is causing abortion-rights groups to expect the worst outcome in this ruling.

In April 2021, the Supreme Court considered New York State Rifle and Pistol Association, Inc. v. Bruen. The conservative justices in the court appear ready to strike down the strict limits on concealed-carry permits by the Empire State, seen as a violation of the Second Amendment. This is the first time in a decade that the high court heard a case involving gun restrictions. One of the key issues for this ruling is how much flexibility states and local governments should receive when making gun-related restrictions.

Vaccine mandates will continue to occupy the attention of the Supreme Court, as they did all summer. So far, the court has declined several opportunities to block state and local public health officials from issuing vaccine mandates. Some justices have shown they are willing to consider some cases of mandates on religious-freedom grounds. But others don’t agree.  This time, the Supreme Court is called to rule on the legal challenge against the testing mandate for major employers set by the Biden administration.

Another progressive policy aspiration that may be crushed by the Supreme Court is the court’s potential ruling on climate policy in West Virginia v. Environmental Protection Agency. Brought by a group of Republican-led states, the lawsuit wants the court to narrow a provision of the Clean Air Act used by the EPA to regulate carbon emissions. If the court agrees, Congress will have to pass new legislation giving the agency the power, otherwise, if the court disagrees, the country will struggle to meet its commitments to reduce carbon emissions.

The court has also added two petitions to its docket that pertain to race and diversity in college admissions. Students for Fair Admissions Inc. v. President & Fellows of Harvard College is a Title VI of the Civil Rights Act challenge against Harvard University. The petition alleges that Asian American applicants are penalized in the process of admission.

The second case involves the same organization against the University of North Carolina and raises similar points. Both lawsuits aim to get the court to overturn previous Supreme Court decisions allowing colleges to consider race and diversity for the application process. The predominantly conservative block in the court might decide on a more heavy-handed approach to reducing affirmative action programs in higher learning institutions.

The practical consequences of the decisions on these lawsuits and others remain to be seen. Soon Americans will know if their access to legal abortions will vanish, whether the requirements for concealed carry will be loosened, and where carbon emissions can be regulated by the EPA. Furthermore, universities may be forced to no longer consider diversity when taking in new admissions.