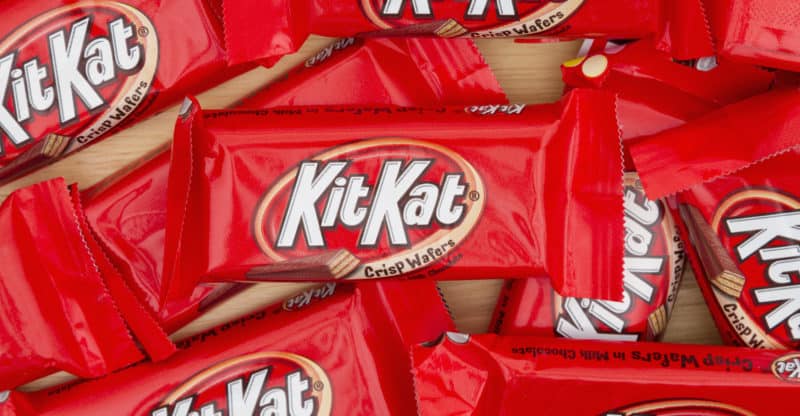 Nestle, maker of KitKat chocolate bars (sold by Hershey in the US), has lost a legal battle with Cadbury to trademark the bar’s famous four-finger shape in the UK. The ruling is the latest in a 20-year battle between the two candymakers.

Nestle claimed the shape its bar its unique and should be protected by law.

But courts have thus far failed to agree with Nestle, throwing out the attempt time after time.

As the BBC points out, a similar bar from Norway called Kvikk Lunsj has been around since 1937 and features the same four-fingered shape. Kvikk Lunsj is owned by Cadbury through Mondelez, its parent company.

“Nestle is disappointed by the Court of Appeal judgment and is considered next steps. KitKat is much loved around the world and its four-finger shape is well known by consumers,” said a spokesperson for Nestle. “Nestle’s four-finger shape has been granted trademark registration in many countries of the world, for instance Germany, France, Australia, South Africa and Canada, further protecting it from imitations.”

Cadbury celebrated the ruling, reiterating its belief that the KitKat bar’s shape should not be protected as a trademark in Britain.

Nestle’s spokesperson said the judgment does not mean the bar’s famous four-finger shape is “free for use in the UK or elsewhere.”

Nestle first attempted to trademark the three-dimensional shape of its four-fingered bar in 2006, but Cadbury opposed the registration. Cadbury won the claim in 2012.

Now, Nestle may take its legal battle over its four-finger shape to the Supreme Court.

This isn’t the first time Nestle and Cadbury have been involved in a legal battle over a trademark. Nestle was victorious in its attempt to block Cadbury from registering its distinctive purple color it uses to package its Dairy Milk chocolate bars.

“Our color purple has been linked with Cadbury for a century and the British public has grown up understanding its link with our chocolate,” said a Cadbury spokesperson at the time.

The ruling comes after months of deliberation. A panel of three appeals judges delivered their 16,000-word ruling on Wednesday. In the decision, the judges wrote that the KitKat shape was not considered a “badge of origin.”

The judges said that while the four-finger shape is well-known and associated with KitKat, “that does not necessarily mean that the public have come to perceive the shape as a badge of origin such that they would rely upon it alone to identify the product as coming from a particular source.”

Lord Justice Kitchen said, “We are concerned here with… the three-dimensional shape of a chocolate bar, that has no distinctiveness.”

The judges also pointed out that the bar’s shape had not been the focal point of its marketing for several years, and had nothing “to do with the informed choices that consumers make between similar products.”

The appeal follows a high court ruling in January, which blocked the trademark attempt. Previously, the European court of justice found that the KitKat bar’s four-finger shape was not distinctive enough to warrant a trademark. Such a designation, the court argued, was not in line with European law.

The ruling may pave the way for competitors to create and sell their own version of the KitKat bar without fear of legal consequences.

The first KitKat-like bar was sold in the UK in 1935 by Rowntree. At the time, it was called Chocolate Crisp. The shape has stayed virtually the same since then. Nestle took over Rowntree in 1988.

Protecting shapes can be a difficult task. Coca Cola managed to trademark its unique bottle shape, but Lindt lost its battle to trademark its Easter bunny shape. Lego’s figures are protected, but not the shape of its bricks.