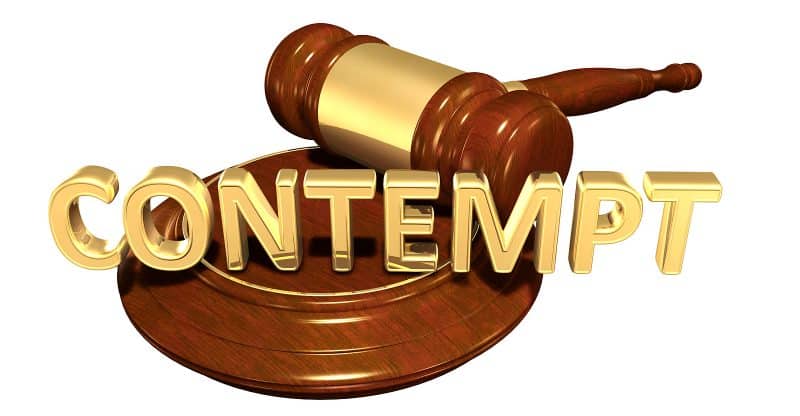 Court orders come in a variety of different types, ranging from visitation or restraining. They are the result of a hearing which a judge hands down to deal with one part or another being wronged. Court orders are legally binding documents, but there are occasions where people simply disobey court orders. There’s a commonly held misconception that court orders are “simply pieces of paper,” but it turns out that this misunderstanding could lead to harsh consequences. Here we’ll explore the implications of non-compliance with a court order.

Acting in Contempt of Court

The Free Dictionary’s legal section notes that breach of a court order constitutes contempt of court. Since this action is covered under this broad scope of punishment, we must first explore what contempt of court means. According to Investopedia, since disregarding a court order usually happens outside of the purvey of the court itself, it can be classified as indirect contempt. Disobeying court orders can lead to severe penalties for the offending individual since contempt of court carries with it harsh punishments in some parts of the country.

Orders are usually delivered as civil actions, and as a result, the punishment for disobeying these orders is covered under civil contempt of court. Civil contempt courses seek to force the offender to comply with the court’s wishes before punishment happens. Criminal contempt can be used to invoke jail time as a punishment for non-compliance. The cost to force the offender to comply is almost as much as taking the case to court. If someone accused of disobeying a court order is found guilty, they could face jail time for failure to comply.

Balancing the Risks and Rewards

Court orders exist for a reason, usually to ensure that an action is taken to benefit the parties involved. However, if the offender refuses to follow the order, it might as well not even be there. Forcing the offender to take responsibility for not following the order can be a costly path to take, but in some cases, it may be worth the investment. It’s a choice that a defendant has to take. If the court order being ignored may lead to serious injury or even death, then the answer to whether to push for compliance is obvious. In other cases, it might be unique to a situation, and pursuing the case may not be in the defendant’s best interests.

Because the decision to push for the enforcement of a court order can be a complicated and tricky process, it’s best to consult a professional. While you may be well aware of the costs and benefits, you stand to gain, speaking to a lawyer can help you get perspective on the issue. Maybe the problem could be resolved in a much more straightforward manner, without the need to resort to dragging the item through the courts another time. Professionals are trained to help you understand the odds of your actions succeeding and if they’re worth spending time and money on.