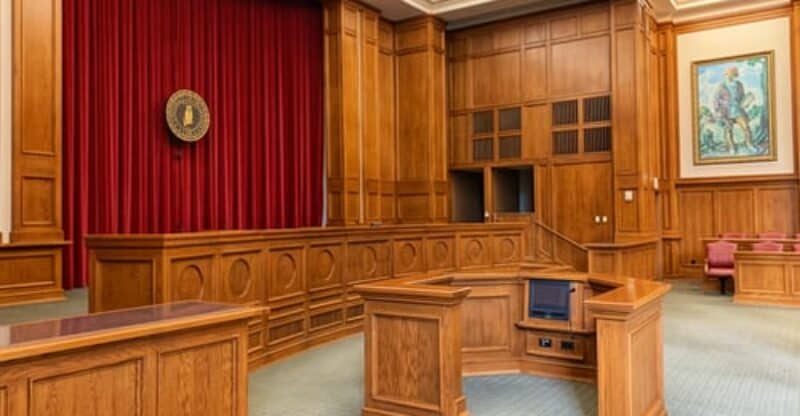 Court stenographers, or court reporters, are people trained to type and write in shorthand, which allows them to write as fast as people can speak. It is typically thought that 180 WPM is the ‘speed of speech’ which means that stenographers have to be able to write at a minimum speed of 180 WPM. Stenographers document and record everything that takes place in a courtroom, which makes them an integral part of court hearings across the world. In this article, we are going to break down what stenography is, and explain why it is important in law.

What Does Stenography Mean?

The word ‘stenography’ comes from the Greek word ‘steno’ which means narrow and ‘graphy’ which means writing. ‘Narrow writing’ therefore, is the writing system of shorthand. Stenographer simply means shorthand writer. Modern-day stenographers use machines called stenotypes, which allow them to type, in some cases, faster than 300 WPM, which is just about double the ‘speed of speech’.

Stenography is a specialist career, still vital to the legal industry despite the massive changes and advancements made in technology. Attempts to phase out stenography have failed in many places around the world, which we will explain, so continue to read more here about it. But first, here is a brief history of stenography, some basic facts you should know about.

Courtrooms around the world use stenography and have done it for centuries. Shorthand, which is the style of writing used in stenography, is an abbreviated writing method that allows the writer to write much faster than they would otherwise be able to. Shorthand can be traced as far back as 63 BC when Roman philosopher Cicero’s accountant Marcus Tullius Tiro took notes in it. Shorthand was further developed by medieval monks. Shorthand as we know it today rose to popularity in 1772 when the British government appointed Thomas Gurney as their first official shorthand writer.

A stenotype machine is a machine that allows a writer to write and record speeches, lectures, or court hearings quickly. The machine was invented in 1879 by Miles Bartholomew. Since then, the machine has undergone incredible development and advancement and is now a highly efficient and integral part of court cases.

As technology became more and more advanced, audio and video recordings began to be used in courtrooms around the world. In 1922, the California Judicial Council claimed that courtrooms would save upwards of $40,000 a year by recording their proceedings instead of hiring stenographers. To save money, courtrooms invested in video and audio recorders, and people theorized that the stenographer’s days were numbered.

However, video and audio recordings are not always successful. There can be interference, data can become corrupted, and sometimes people just forget to turn the devices on! Because of this potential threat, the stenography industry had to adapt to the times.

Computers became more popular, and as they did, court reporters began using these machines to compete with other forms of technology. Stenotype machines could now be plugged into portable computers, laptops, and be used to translate shorthand onto the computer screen in real-time. This was something video and audio recorders could not accurately do.

The Importance of Stenographers

It is a requirement in many places for courts to have written transcripts. This alone makes stenography something that is still needed. Court reporters sit in on courtrooms and transcribe as the case is heard. Many now use a technology called ‘steno masks’ which are microphones plugged into their computers that run voice-recognition software. The stenographer then, in real-time, cleans up the machine’s mistakes and errors; the perfect fusion of technology and stenography.

While technology is an incredibly important part of all of our lives, it cannot be entirely trusted just yet. Machines are not infallible and make mistakes. A stenographer must supervise and verify what these ‘steno masks’ record. Court reporters are now also tasked with writing down the defendant’s gestures and expressions, as well as their reactions to things. This is something that no machine can do (at the moment).

The Future of Stenography

The future of stenography is clear. Whatever technological advancements are made, stenographers will have to adapt to them. It is unlikely that at any time, now or in the future, that stenographers will not be needed. They have been used for centuries and will be used for centuries more. The accuracy with which they work is fundamental to legal hearings and in other areas where stenography is used. Court reporters are needed now as much as they were a century ago.

Stenography is an important part of the law. This article should have demonstrated that to you, as well as telling you a few things you might not have known about stenography.

What is the use of stenography?

Court reporters (stenographers) can type in shorthand which allows them to type as quickly as people speak. This provides important and accurate documentation that is immediately available.

Do stenographers type every word?

Yes, and they can type full words at once by simultaneously tapping multiple keys.

What Does Stenography Mean?

Stenography is used in courtrooms.

Is stenographer a good job?

Yes, there is still a huge demand in the court house for court reporters (stenographers).

What are stenography skills?

Ability to do shorthand and then transcribe your notes.

How long does it take to become a stenographer?

It takes close to three years