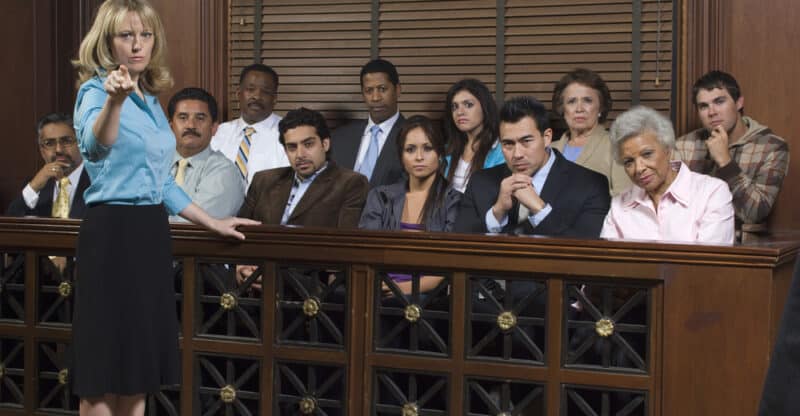 One of the most inalienable aspects of the American justice system is the presumption of innocence—a defendant is presumed innocent until proven guilty by a court of law. So it is upon the prosecution to provide evidence to prove beyond any reasonable doubt the defendant is guilty of the charges against them. Depending on the offense committed, the defendant can either face a jury or a bench trial. So how are these two legal processes different?

In a nutshell, a bench trial is a legal court process presided upon by a jury of your peers, whereas a judge steers a bench trial.

A bench trial happens before a judge. He/she hears and analyzes the evidence provided before them and makes a ruling. In the United States, 88% of all federal cases that make it to trial are handled by a jury.

During the bench trial, the prosecutor will be required to provide all the evidence linking the defendant to the criminal charges against them to convince the court they are guilty. Suppose the defendant is facing trial on DUI offenses. The prosecutor will be expected to provide a blood test result indicating the driver had a Blood Alcohol Content (BAC) of over 0.04 percent while operating a commercial vehicle.

Where witnesses are required to testify, both the prosecutor and the defendant will be allowed to provide their side of the argument. During this time, the defense team can examine the state’s evidence and ask the court to disqualify some of the evidence because they are irrelevant, prejudicial, fabricated, or not correctly obtained. If the judge made an error, the law allows the defendant to appeal to a higher court, modifying the decision or asking the judge to reconsider under a different standard.

In some situations, the attorney may prefer a bench trial because it eases the presentation of evidence and arguments aimed at convincing the court to acquit their client. This is sometimes useful in complicated cases. It also takes less time to persuade a bench judge than 12 jurors. They can also take advantage of the judge’s recent published opinion to get potential leads to build a winning defense. Within the opinion, the judge can provide excellent insight into preferences regarding the presentation of evidence, specific behaviors by parties that led to the win or loss of a case, and the most convincing arguments during the trial.

What happens when the defendant chooses a bench trial?

The defendant will enjoy the following benefits from the bench trial:

However, the defendant may face the following challenges during the bench trial:

Unlike the bench trial, the jury trial happens before a group of jurors who listen and examine facts in the evidence presented by both parties during the trial to make a ruling whether the defendant is guilty or not. Jury trials mainly deal with severe criminal cases like rape and murder. But they also handle cases of fraud, defamation, and false imprisonment.

In the United States, defendants are entitled to a jury trial depending on the gravity of the crime committed. During this trial, the lead judge will play a significant role in determining the evidence the jury should consider while handling a case. He will also direct the jurors on the legal rule to be applied while considering facts presented in the evidence, and if the defendant is found guilty, the judge will sentence them.

A jury trial is better compared to a bench trial in the following ways:

However, you are likely to face the following challenges during the jury trial:

Consulting a professional lawyer will help you decide whether a bench or jury trial will be most suitable for your case. . Remember, regardless of who determines your case, you’ll need good representation. When selecting a lawyer, make sure you do a background check to determine their reputation in handling similar cases.

What happens at a bench trial?

At a bench trial, there is no jury. The judge renders a verdict and decides who the winner of the case is.

Why would you have a bench trial?

Bench trials are generally faster as there is no jury selection.

What is the difference between a jury and a bench trial?

Jury trial allows you to present your case to the multiple every day people. Bench trial is presented to the judge.

How long do bench trials take?

Generally less than three hours unless multiple witnesses are required.

Can a judge set aside a verdict?

The judge can only set it aside if there is a legitimate reason to do so. If the jury made a clearly erroneous decision such as finding someone guilty even though the evidence clearly wasn’t sufficient.

Do bench trials have opening statements?

Yes, they do but its a bit different. In a jury trial, the opening statement is presenting the facts to the jury. In a bench trial the facts and law needs to be intermingled so that you can present your legal theories as applied to the case at hand.

What does the judge do in a jury trial?

Judge decides on what evidence can be shown to the jury. Judge is there to make sure that the process is fair and follows the law.

What’s the point of a judge if there’s a jury?

The judge makes sure that the process is fair and orderly and follows the law.

Does the whole jury have to agree?

In nearly all criminal cases, all jurrors must agree. Some states do not require a unaminous decision in civil cases

What happens if one juror says not guilty?

Then there is a mistrial and there can be a new trial. If all jurors agree that you are not guilty, the verdict stands and cannot be overturned by the judge, appealed or retried.

Can an acquittal be overturned?

In the United States, a finding of not guilty by bench or by jury trial cannot be overturned due to “double-jeopardy”.

Is there an exception to double jeopardy?

The only exception is if you were never in jeopardy. If the defendant bribes a judge or jury, there was never any jeopardy and the case can be retried. Scotland has two types of acquittals, not proven and not guilty. Not proven allows the case to be retried.

What must the prosecution prove to get a guilty verdict?

Guilty beyond a reasonable doubt. Prosecutors must show that the evidence does not allow any other reasonable interpretation.

Do all court cases go to trial?

Only a small fraction of cases go to trial.