Baby Boomer CBD Use Equals That of Millennials 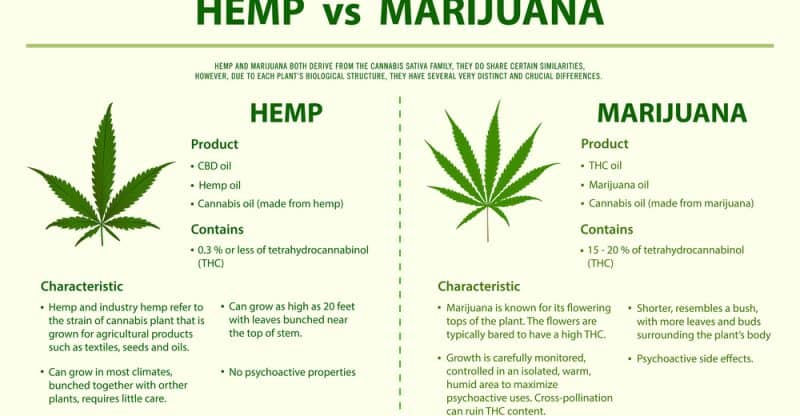 Hemp and marijuana are associated with one another. However, despite popular belief, they’re not the same. Not only does hemp not have the same properties as marijuana, but it’s also grown differently. The differences don’t stop there either.

Hemp and marijuana are different in terms of their function. They’re also not grown in the same environment, nor does the medical community and various other industries use them the same. Despite the differences, politicians ended up grouping both Cannabis species as a Schedule I drug. Therefore, both became illegal back in 1970. Legal changes are currently being made to the legality of cannabis and hemp, but it hasn’t stopped the confusion between the two.

Marijuana is commonly used in the medical community. More and more benefits of it are becoming known, such as its ability to reduce the prevalence of seizures. On the other hand, hemp is used in supplements and skincare products. Manufacturers use it to create clothing and accessories.

Hemp doesn’t have the psychoactive properties that marijuana does. You can’t get high off of hemp, whether you ingest it or smoke it. Therefore, marijuana is the cannabis product used for recreational purposes. Hemp doesn’t contain near the amount of tetrahydrocannabinol (THC) as marijuana does. In fact, it consists of less than 0.3 percent of THC.

Hemp is much simpler to grow than marijuana. It doesn’t require a controlled climate like marijuana does. It actually grows well in most climates. When they grow, you can tell the difference between the two. If you take notice of the leaves, the shape of marijuana plant’s leaves look broader. It has a tight bud. As you examine a hemp plant, you’ll see it has skinner leaves, mainly found on the top of the plant. You won’t see many branches or leaves on the lower portion of the plant. If you compare the plants from a distance, you’ll notice the marijuana plant is shorter and fatter. It looks like a bush. Hemp, on the other hand, is usually much skinnier and grows taller.

Hemp is plentiful in Central Asia. It’s been grown in ancient China since 2800 BC. Today, it’s still used because of how durable it is. Each individual fiber is strong and has elasticity. Today, it’s used to make everything from burlap to canvas to sponges to yarn. Humans may consume oil produced by the plant, and it has nutritional value.

Obviously, hemp and cannabis are different from one another in almost every aspect. They’re grown differently and serve purposes unlike one another. Yet, still, confusion exists between the differences between the two.