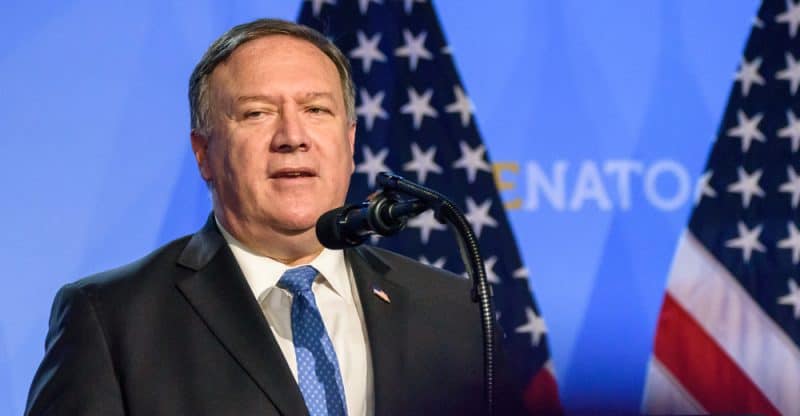 The US Secretary of State, Michael Pompeo, responds to maritime disputes in the Eastern Mediterranean and disapproves of Turkey’s actions. The US is not interfering but calling for a diplomatic resolution and regional cooperation.

In a short visit to Nicosia, Cyprus, US Secretary of State, Michael Pompeo met up with Cypriot President Nicos Anastasiades and expressed his concerns about Turkey’s movements in the region.

His visit on the island was preceded by a visit to Qatar where the Afghan peace process came under the spotlight.

The crisis which prompted his visit to Nicosia concerns the natural resources in the maritime regions of the Eastern Mediterranean and the rising tensions in the area. Fears of conflict have been sparked as Ankara continues disputing the offshore naval sphere of influence and the natural gas resources of Greece and Cyprus.

“Increased military tensions help no one but adversaries who would like to see division in transatlantic unity,” Pompeo said. He expressed his opinion that these disagreements over security, maritime, and energy resource issues should be resolved calmly through diplomacy.

Greece and Cyprus strongly oppose the two survey vessels they say Turkey is operating in their respective exclusive economic zones. In August, Turkey deployed an exploration vessel backed by military frigates in waters claimed by Greece, and the NATO member responded by shadowing the ships. Greece took part in military exercises with other EU members and the United Arab Emirates in a show of strength.

According to Pompeo, Cyprus has the right to exploit its natural resources, including the gas reserves found on its continental shelf.

Turkey responded angrily earlier this month when the US decided to lift an embargo that has been in place since 1987. The United States plans to increase the cooperation it has with Cyprus over security. In a statement, before he met with the president of Cyprus, Pompeo declared that lifting the 33-year-old arms embargo is something that the US had been working on for a long time and was consistent with American policy.

The eastern Mediterranean island of Cyprus has been divided since 1974. The division occurred when Turkey invaded the northern area of the island in response to a coup by the Greek military junta at the time when Athens wanted to reunite Cyprus with Greece.

Ankara is the only state that recognizes the self-proclaimed territory of Northern Cyprus with its minority Turkish population. The southern part of the island is ruled by the Greek Cypriot government and is internationally recognized. The government represents the whole island in the European Union, even though its authority is only within the territory of the island not held by the Turkish Cypriot state.

Pompeo’s visit to Cyprus followed close on the heels of a visit to the island by Russian Foreign Minister Sergei Lavrov. According to France 24, Lavrov offered to play the role of peacemaker between the Cyprus Turkey energy and maritime rights dispute.

Anastasiades welcomed the timing of the visit by Pompeo. In his statement, he added Cyprus supports the resolution of the disputes in the region through dialogue. He also welcomed the stance taken by the US condemning the actions of Ankara and their interest in preserving stability in the Eastern Mediterranean.

Reuters reports that Pompeo also had the opportunity to raise concerns about Russian money laundering and the frequency with which Russian warships make calls to ports on the island of Cyprus.

Nicosia has repeatedly denied the former concern and has frequently stated it allows Russian naval ships to use its port facilities for humanitarian purposes. Pompeo asked the Cypriot president to consider US concerns that the Russian military vessels stopping at their ports are “not conducting humanitarian missions to Syria.”

Pompeo said the visit was part of ongoing efforts by the US to scale down tensions and resolve issues diplomatically and were to be followed by phone calls between President Donald Trump with Recep Tayyip Erdogan, the Turkish president and Kyriakos Mistsotakis, Prime Minister of Greece.

Image used under license from BigStock